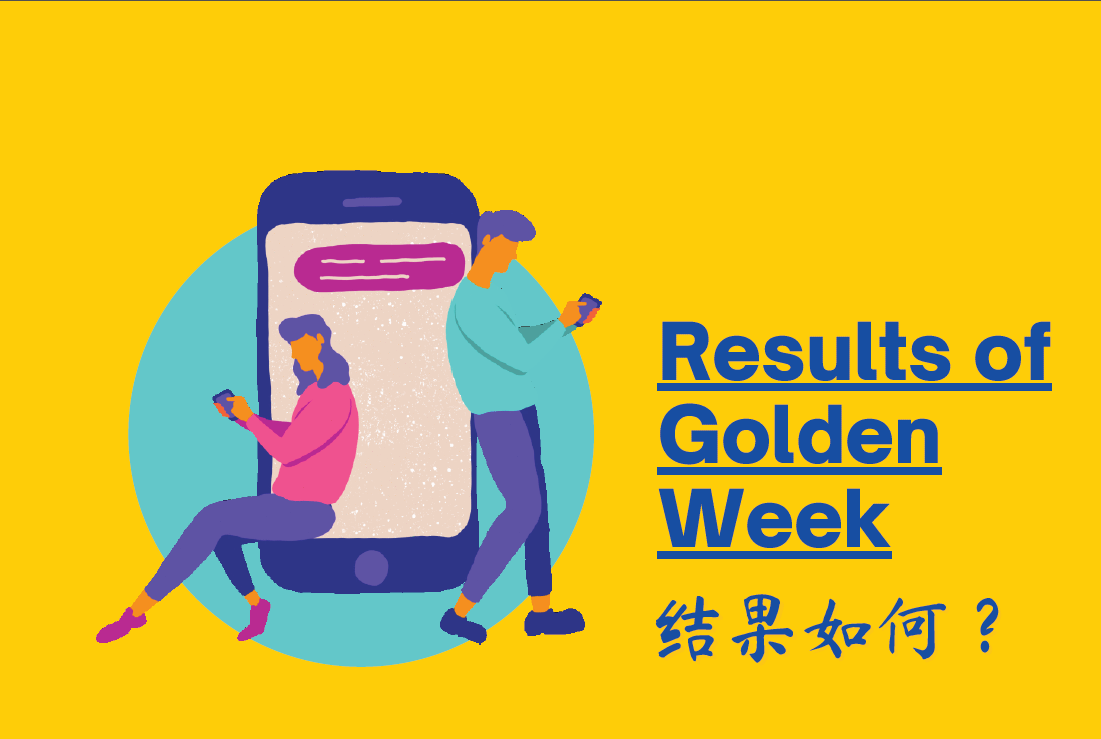 China Golden Week is over and despite the normalization of covid-19 prevention and control measures, many Chinese are satisfied with how they spent these last 7 days of vacation.

But does this general impression reflect the numbers? Although it may seem a cliché, but “the numbers don’t lie, and they don’t care about your feelings”.

According to monitoring data from the Cultural Tourism China Data Center, the tourism market during this year’s national holiday has declined compared to the same period last year. The total number of people who travelled on railways, highways and through domestic flights across the country is estimated to be around 63.02 million, down 30.0% over the same period in 2019 and 3.1% over the same period. At Golden Week 2020.

In the seven days of the Golden Week of 2021, a total of 551 million domestic tourists were received across the country and domestic tourism revenue was 389.06 billion. However, this reduction in consumption cannot be regarded as the decline in the level of consumption of the Chinese people but should be traced back to structural changes.

Now let’s turn our attention to the e-commerce side. As people in today’s China can’t live without their apps, looking at the most common apps for payments and online shopping we can get a big picture of this year’s Golden Week performance from another perspective.


Meituan released the “National Day 2021 Golden Week Consumption Trend Report”, which shows that the top 10 cities for food consumption during the National Day holiday this year are Chengdu, Beijing, Shenzhen, Guangzhou, Wuhan, Chongqing, Shanghai, Xi’an, Hangzhou and Changsha. Among them, Changsha is the newcomer this year.

In conclusion, this year’s Golden Week by Chinese growth standards cannot be considered a success, but certainly the decline was lower than previously expected and this thanks to the buying power of Chinese consumers. 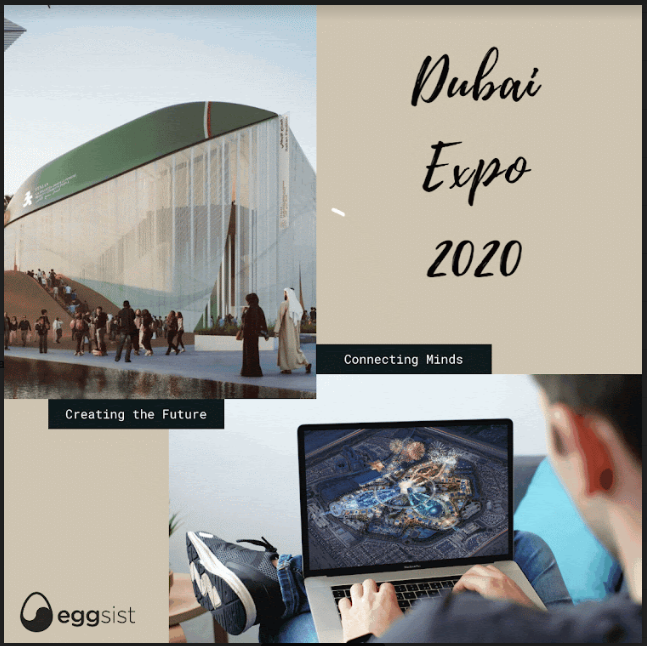 The World Expo is an exhibition of the World, an international fair designed to showcase each nation’s greatest achievements. Truly a moment to celebrate earth and us.

Dubai, United Arab Emirates, was selected to host the next World Expo in 2020, but due to the COVID-19 pandemic it was postponed to 2021 and now is currently underway, it will end on 31 March 2022.

The main theme of the Exhibition is Connecting Minds and Creating the Future, closely connected to the Arabic name of the city, al-Waṣl (in Arabic ﺍﻟﻮﺻﻞ), which means “connection”. Connecting cultures and contributing to a more prosperous future are also themes of the Chinese Pavilion in Dubai.

The China Pavilion will be one of the largest at Expo 2020 Dubai at 4,636 sqm. It symbolizes hope and a bright future and is designed in line with the principle of the “combination of the Chinese and Western culture”.

The China Pavilion will be one of the largest at Expo 2020 Dubai at 4,636 sqm. It symbolizes hope and a bright future and is designed in line with the principle of the “combination of the Chinese and Western culture”.

The Chinese pavilion, built in the shape of a traditional lantern, was called “Light of China”, conceived as a showcase of the latest achievements by China in the various sectors of information technology, transport systems, artificial intelligence, smart living, and space exploration.

In terms of architectural design, says Zhang Shenfeng, Commissioner General of the Chinese Pavilion, “the structure intends to give the feeling of the depth of Chinese culture and its long history, artistically integrating traditional elements with modern technologies”.


“Light of China” has already become a source of pride for some early Chinese visitors,  “You can see that now we are experiencing rapid scientific development,” said Shao Xiong, a Chinese national who was visiting the pavilion.

And finally, about visitors of the World Fair, in the two previous editions, Milan Expo 2015 registered 22,2 million visitors, and Shanghai Expo 2010 registered 73 million visitors (where only 5,8% were foreign visitors) , despite being delayed for a year by the pandemic, Dubai is hoping to boost its economy by attracting around 25 million visits to this year’s World Expo. 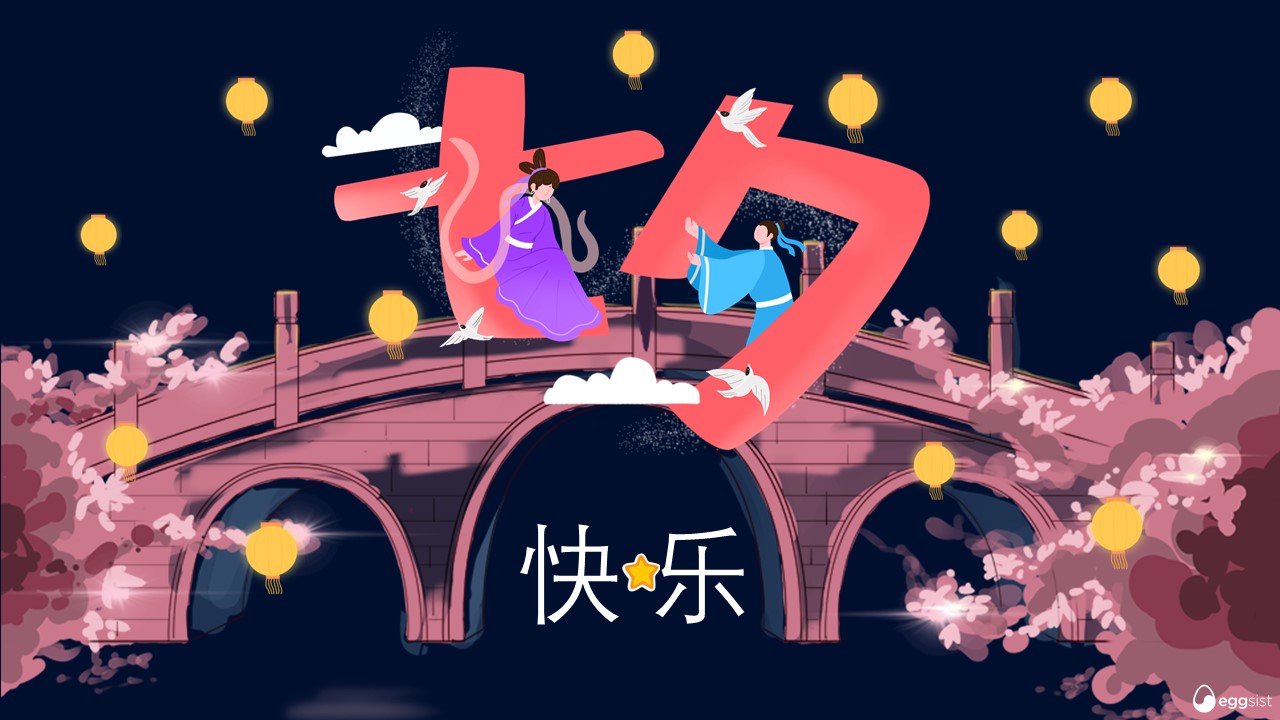 Let’s celebrate together the power of LOVE and the willingness to travel back all around the world.

Traveling together, visiting new places, discovering different cultures, trying local delicacies, all things that we used to take for granted, but now seem distant and foreign to us.

In China, and throughout Asia, Qixi Festival is a very important day (this year will be on 14.08.2021); a day in which people celebrate the triumph of love over the insurmountable difficulties that life can put in front of us!


Let’s celebrate together the power of LOVE and the willingness to travel back all around the world.

📌 Our offices will be closed from August 9th to August 26th for summer break.

END_OF_DOCUMENT_TOKEN_TO_BE_REPLACED
Let’s celebrate together the power of LOVE and the willingness to travel back all around the world. 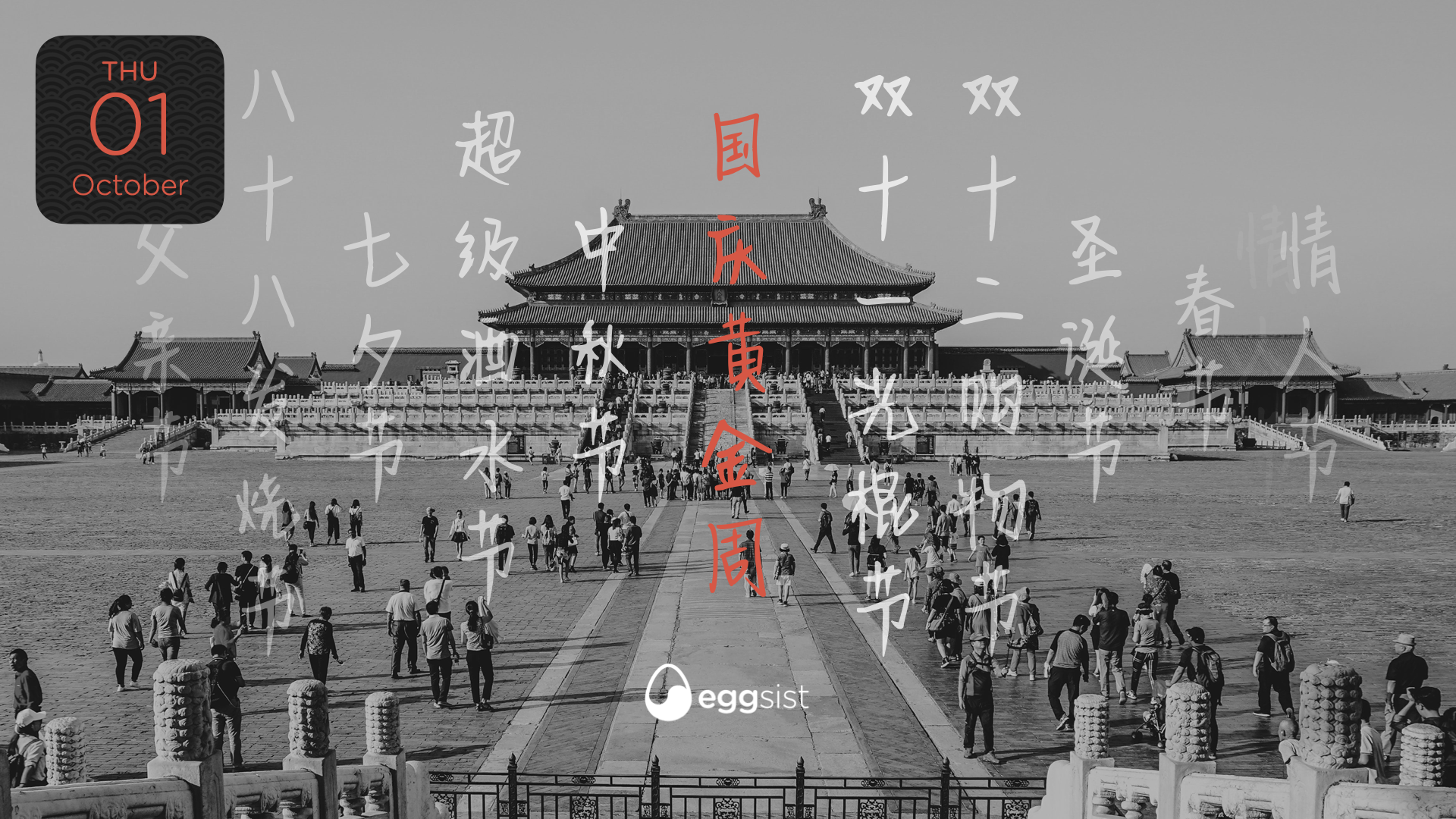 Why you should keep an eye on the Chinese Golden week?

Today people are celebrating one of the most important festivals in China, better known as 中秋节 (zhongqiu jie), or also called “Moon Festival”.  This year will be combined with the National Day, which is to commemorate the founding of the People’s Republic of China in 1949! Starting from the 1st of October start an important week for the tourism industry the Golden Week.

Why you should take into consideration these cultural celebrations? Discover it with our infographic down here:

Next step: identify the right channels!

Nowadays, Cross-Border and live streaming strategies become China’s most profitable form of communication able to support your brand in building a digital presence and drive revenue in the Chinese market.

EGGsist provides tailor-made solutions through the most popular social media, social commerce & fintech platforms such as Alipay, Secoo, WeChat, and many more to discover…

Contact us to learn more!
END_OF_DOCUMENT_TOKEN_TO_BE_REPLACED
Why you should keep an eye on the Chinese Golden week? 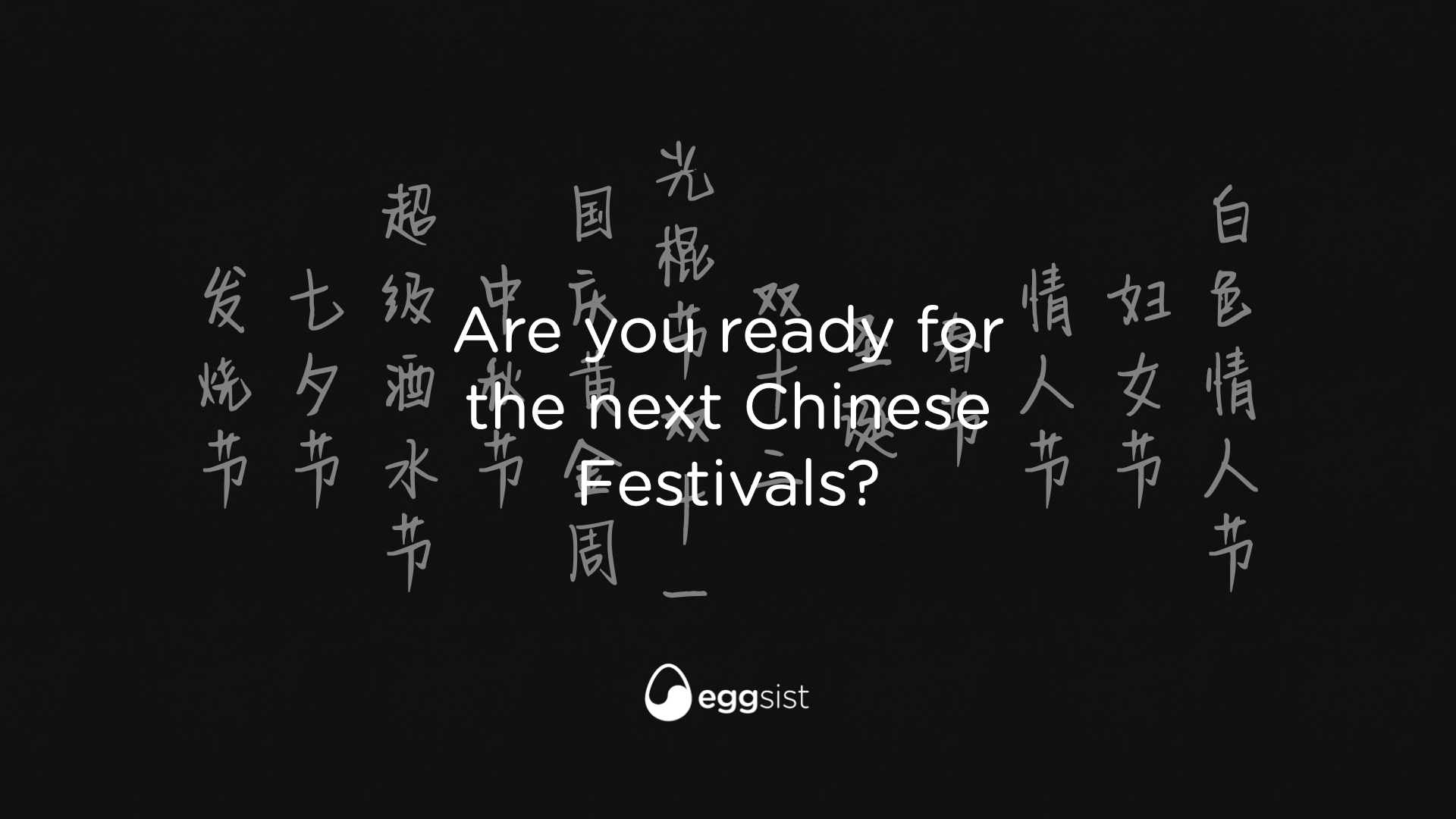 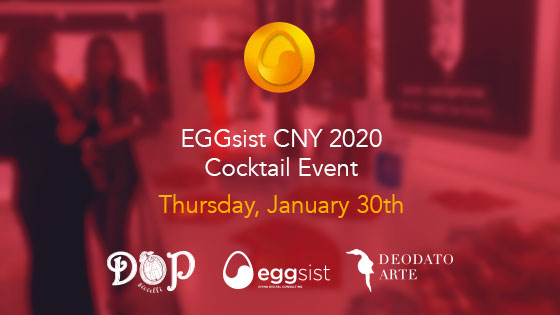 EGGsist celebrated the Year of the Rat 鼠 with an O2O Cocktail event!

This was an occasion to meet clients and partners and an opportunity to network and promote O2O (online to offline), a key strategy for Chinese digital marketing.

The event was held in the well known Deodato Arte Gallery in Milan, who thanks to EGGsist implemented Chinese mobile payment systems and joined the Alipay CNY Global Campaign  to offer discounts and coupons to Chinese users interested in modern and contemporary art.

During the event, the street artist Mr. Savethewall performed a live performance in celebration of the Year of the Rat  and the Italian jewelry brand Gioielli DOP, in partnership with EGGsist, launched an exclusive limited edition bracelet with a silver  little mouse charm. 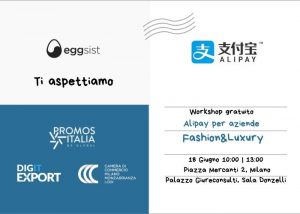